A majority of 2019 University Hills Community Survey respondents rated their overall satisfaction with living in University Hills at either “4” or “5” on a scale of 1 to 5, with 5 being “Extremely Satisfied.” The survey, conducted online in January, received 489 responses (out of roughly 1,400 rental and homeowner households). The survey asked residents to consider a range of issues affecting quality of life, housing unit characteristics, physical surroundings, public safety and services provided by ICHA, and community social interactions. Among respondents, 84% of apartment dwellers and 90% of homeowners chose a “4” or “5” on the satisfaction scale, as did 81% of condo owners and 79% of townhome owners. Respondents reported high levels of general satisfaction and were neither more (nor less) satisfied whether they had lived in University Hills for less than a year or more than 20 (or a number of years in between).

The histogram below provides an alternate illustration of University Hills resident satisfaction by housing type. 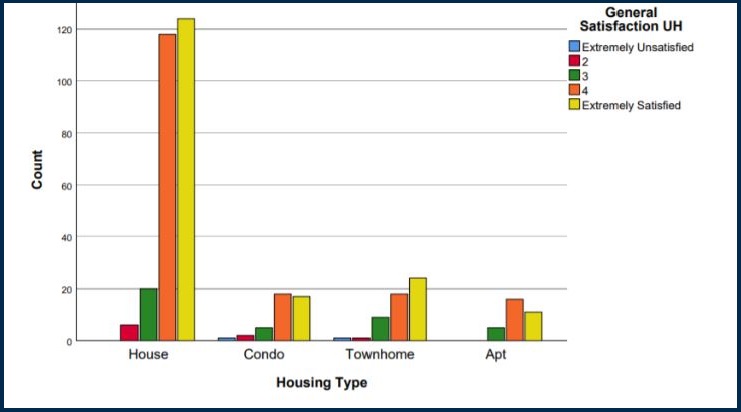 Future Survey Articles Will Focus on:
The University Hills Resident Survey was carried out under technical direction from Ken Chew, a demographer, long-term resident, former Chair of the Homeowner Representative Board and former Chair of the ICHA Board. He is analyzing the survey and also contributed to this article.
Victor VanZandt2019-09-18T18:15:03-07:00September 18th, 2019|Categories: Spotlight Story|Tags: community survey|